You might think that because I am tucked up snug in my beautifully built laneway house that I no longer take note of problems other people have with their housing.

In fact, I think I’m even more interested in Vancouver housing, its affordability and its quality.  I have a long history of living in the area, in everything from basement suites to west-side detached homes, and I like to keep my oar in the water, so to speak.

And speaking of water, a headline in the Vancouver Sun caught my attention this morning:

And it brought back such memories.

When DH and I first bought the condo where we lived for 13 years, we got it at a drastically reduced price.  It was a bargain because the building was about to undergo rain screening.  There was a reluctance on the part of potential buyers to move into a place that would be swathed in tarps and green mesh for the next six months while the exterior was ripped off and replaced. 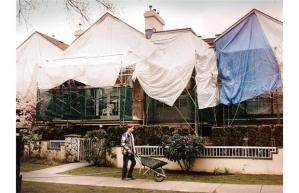 Cristo would be proud! But we weren’t.

But we were happy to seize this deal because it would allow us to get into a great neighbourhood for a terrific price, and because I had just gone through the same procedure when the co-op where I was living was rain screened.  Ugly but temporary. And we didn’t have to pay for the rain screening at the new place because the assessment to pay for it had already been accepted by the condo board before the condo was put up for sale, so the previous owner had to pay for it.  That rule was to prevent people from getting a hefty assessment then ducking out and passing it on to unsuspecting buyers.

But it didn’t prevent some people ducking out before the assessment was made. We had already put in an offer to another condo conditional to our reading the minutes of the condo association meetings.  It was a really beautiful place, wood floors throughout, sun-drenched rooms, and an interesting layout.  But we had withdrawn the offer when those minutes revealed that the building was basically a sieve, and was either going to be undergoing expensive and extensive rain screening or would fall down in a few short years, a mouldy mess. It’s just a suspicion, but I felt that the owners had agreed NOT to have a proper inspection which would lead to an assessment until they had a chance to sell their places — passing on the problem to the poor saps who bought.  Rats leaving a rotting ship, so to speak.

The condo board at our building was very pro-active.  Regular maintenance was done.  And the building and the condos within kept their comfort and their value.  I have no doubt that I will be able to point out that building in the coming decades as the place where Nana and G-Pop lived when we were first married, and it will still look great.  But we paid the price — literally.  Our condo fees were high for such a small building, one of the determining factors in our deciding to move to the laneway.

Many buildings put up during the same period did not opt for rain screening.  These were often larger ones where the condo board was not made up of a few stalwarts but instead was full of people averse to spending money on maintenance. Some years ago I helped a young friend stage his condo for resale.  He had volunteered for the board, and found that he could not persuade them to raise the maintenance fees to pay for future upkeep — or even for what he felt were necessary repairs.  The rest of the board much preferred to keep the fees low, not do the work, and….rely on divine intervention.  Or resale before the mould hit the fan.  He decided to get out while the building was still in good enough shape.  But the signs were already there that there would be problems, and not too far off.

So now the chickens have come home to roost — and found it’s falling apart.

Why now? What’s happened to bring this problem to the forefront again?

And why are Vancouver condos so prone to leaks?

Starting the adventure of building a laneway house in the real-estate jungle of Vancouver, BC
View all posts by ladywholivesdownthelane »
← What’s keeping in the kitchen?
Leaky condos part II – why oh why? →