Anyone who knows me (or has seen me) knows that I love to eat and I love to cook, and both these activities are super important during our isolation. It’s very comforting to have a nice meal every day, just a little oasis of normalcy in these chaotic times.

We are relying on food pickup and deliveries these days, with the occasional trip to the grocery store

The first delivery I received at the end of March contained no eggs, and had substituted skipjack instead of albacore tuna (who can tell the difference?  DH) and of course there was no toilet paper.  So when our supplies ran out, and the next pick up scheduled for over a week away, I had to go to Superstore in person.

Fortunately, being old has its rewards and the store is open only to the elderly and disabled from 7 to 8 am.  DD said she would give me a ride so we set out at dawn for the store.  It was the first time I had left the house in a week.  I was overly excited, ridiculously so. 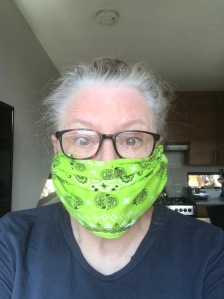 Give me my groceries!

And that’s how I found myself staring at a cooler full of meat and thinking “no bangers!  What is this?  Soviet Russia?”  There were dozens of types of sausages, but no bangers.  And the only ground beef was in big packages.  Definitely not as bad as the previous week, when DH went to a supermarket to find that the only meat available in the cooler was chicken gizzards and hearts.  But still, I had my heart set on some nice bangers and mash……

But I digress.  Because this isn’t about bangers and mash it’s about security of our food supply.

So far, so good.  In our home we did run out of some items but we’ve been really good about staying out of the stores. DH wanted to make hamburgers for dinner the other night and I made our own buns, and mayonnaise, and even baked onion rings.  Yes!  Just like the pioneers!

We are not crazy about supermarket coffee, because we drink decaf and there are very few mainstream coffee brands with good decaf.  But JJ Bean sent us some out of the goodness of their hearts because I ordered it online.

The only worm in the apple is that sometimes delivery orders are cancelled, seemingly capriciously.  And you never know if your order has been cancelled until the time it’s supposed to be delivered, so you can’t plan ahead.

And we know that there may be food shortages of some items in the future due to disruption in the supply chain.  And some have likened this to the shortages during the last war (WW11 I mean, not Afghanistan).  But that’s ridiculous.

For one thing, Canada supplied half the meat consumed in Britain during the war, and that led to shortages here and there, and eventual rationing in Canada.  In just one year, 1942, coffee, tea, and sugar were rationed here in Canada.  Imagine getting through a disaster with limited tea and coffee and no cookies! Butter was rationed, starting the widespread acceptance of margarine as a substitute. The loss of Japanese Canadian farms in the Fraser Valley meant some crops including strawberries were ruined. 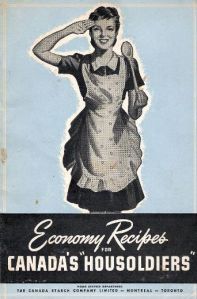 More information can be found here.  Seriously, check it out, it’s very interesting. Because we were coming off the great Depression, and because the first of Canada’s Food Guides was published, even under rationing people could be eating better than they ever had.

Thanks to the people who are on the job making sure we are getting our food, from the pickers to the packers to the truckers to the cashiers, everyone is risking their health to make sure we can be fed.  And safe.

Posted in Life. Bookmark the permalink.
My Pain, My Life, My Struggles, My Fight