Big cities want to attract citizens — people who live right downtown, not just commute from the suburbs to work.  One of the reasons Vancouver is such a vibrant city is because people live in the downtown core.  At any time of the day or night you’ll find people going to restaurants, coffee shops, bars, concerts, sporting events, but also walking their dogs, dashing out for grocery shopping, visiting their neighbours.  I know lots of large cities where the downtown area becomes a science-fiction dystopian landscape at night, the only cars the occasional police car or delivery van.

According to this Houzz article, Mayor Bloomberg is trying to find ways to bring people back into the city to live.  And right now, that means getting more apartments into smaller areas.

The city states that there are 1.8 million residents who are singles and couples, but only 1 million studio and one-bedroom apartments in all five boroughs.

He called for a design competition, and a couple of weeks ago he announced a winner.  An exhibition of the entries will be held at the Museum of the City of New York until this September.

If you are in the area look it up.

One of the reasons we are looking forward to the laneway living experience, is because we have to rid ourselves of extraneous “stuff”.  That is a good thing.  As Wordsworth says

THE world is too much with us; late and soon,
Getting and spending, we lay waste our powers:

Others have gone before us, and show us the way.

Sherry Willis of the Half-Pint Homestead blog writes about it on the Tiny House Blog.  Like her, we must begin

the complicated process of extricating ourselves from our possessions.

And that’s what it’s all about, isn’t it? When we hold on to “things”, no matter how precious they seem to us at the time, we are owned BY them.

But most advice I get on how to de-clutter seems to be geared to clearing the mess that we can see — hiding away the untidyness and detritus of our lives.  But we want to get rid of it.  Forever.  Banish it from our lives, so we can live so much more simply.

That’s why I like what Laura Norcross has to say about winnowing her wardrobe at Tiny House Talk.  It’s a process.  Do it once, twice, how many times you need to say good-bye to things that you don’t need any more.

How cool is this?

This site lets you make a watercolour of your town’s map. 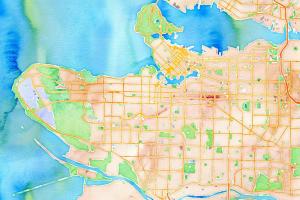 According to this story on Vancouver radio station CKWX, there are a record number of permits  for laneway houses approved for this year.

A view from above

I was visiting a friend in the hospital a few summers ago, and looked out over our neighbourhood.  I was amazed to see how lush and green it looks with the large trees lining the streets. The apartment buildings are all 4 storeys or less, and it looked so inviting and friendly.  It’s amazing what looking from above can do to help you see the true structure of your area.

Houzz is showing what different neighbourhoods look like.  It’s obvious that some of them were designed by people who would never live there — cut off from shopping and parks.

Get a Bird's-Eye View of America's Housing Patterns

It’s now at ladywholivesdownthelane.com, no “wordpress” in the address — I bought the domain.

When I first started the blog it was just supposed to be for fun, so my family and friends could check up on the progress of our laneway house project.

That was before I became interested with the whole “living small” movement.

Then I had the radio interview and I thought it would be nice to hear from more people — much easier to find me when I’m just the ladywholivesdownthelane.

Plus I wanted a way for others who are interested in laneway housing —  or actually living in a laneway house — could contact me.  I think it would be very nice if we could form a virtual neighbourhood of laneway occupants. And that would mean reaching out to people who left me comments.

I found out that, with the wordpress domain blog you have to register to leave a comment, and I know some people are reluctant to do that.  I know I am.  So, in order to be more inclusive, it would be better to have my own domain.

So here it is!  Expect a few more changes — some links to other sites I think you’ll find interesting, etc. I’m just starting to explore the capacity of the new arrangement.

*By the way, the correct answer to “Notice anything different?” is always “Have you lost weight?”.  Always.

I admire people who need less than I do.  There is almost a Zen-like approach to living that comes with living with very, very little.  These Tiny Houses featured in this Apartment Therapy story  prove that you can do more with less. 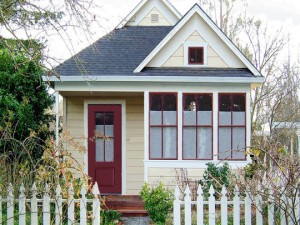 And they’re so cute, too!

One of the reasons we are looking forward SO MUCH to our new laneway home is because every bit of it will be designed and built specially for us by Novell.  Do we want drawers in the stairs for shoe storage? It shall be done.  Sitting room and kitchen upstairs? Our wish is master to their deed.

But some people don’t want to spend the bucks on a custom home — or don’t need to.  They just want a rental unit or a studio that can house friends or visiting relations.

You can still buy a standard plan from one of the laneway builders in town.  OR, if you really want to save money, go with a pre-fab. 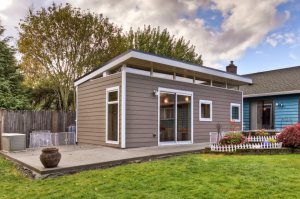 Westcoast Outbuildings will sell you a pre-fab home like the one above for less than $35 grand.  (That doesn’t include permits, electrical, plumbing, or appliances, natch, and I don’t think it includes installing the concrete pad it rests on).

It’s not for everyone, but don’t think you are priced out of the laneway home market just because you can’t — or won’t — pay for a custom build.

Just a caveat — I ran across the Westcoast Outbuildings website and thought I would tell you about it.  I haven’t had any contact with them and of course, I’m not taking any money from them.  Also, I can’t confirm their claims that you can get a permit to build or live in one of their projects.

An affordable apartment in New York — can it be true?

From Houzz (see, I told you to subscribe) comes the story of what New York City is doing to create affordable living.

New York’s problem was not the same as Vancouver’s.  On the surface it’s just too few places to live.  But New York needs more spaces for singles and couples, not necessarily families.

In July 2012 New York City’s Department of Housing Preservation and Developmentlaunched an adAPT NYC competition to develop a building with microunits on a city-owned lot in Manhattan’s Kips Bay neighborhood. The competition was spurred by the changing demographics of the city, which now has 1.8 million one- and two-person households (comprising more than 20 percent of its 8.4 million residents) but only 1 million one-bedroom and studio apartments. Furthermore, the current zoning code restricts the size of apartments and their density (number of units per lot), making it impossible to build small units for singles and couples.

Today, Mayor Michael R. Bloomberg announced the winner of the competition at the launch of the Museum of the City of New York’s Making Room exhibition, which also explores small apartments in the city through design. A team made up of Monadnock Development, the Actors Fund Housing Development Corporation and nArchitects won with their My Micro NY entry. Here are details of the winning design.

Sizes start at 250 square feet, with an innovative design that makes it seem like much more.

Going smaller is not always the answer

I have been singing the praises of living small for years — and on this blog for months.  But the problems that Vancouver has with housing its citizens cannot be solved by building a few (or a few hundred) laneway houses.

For us, it’s the perfect solution — there are two adults in our immediate family (and two indoor cats) and we are certainly not planning to add to that number of people or cats in the future.  We are building our new laneway house in the garden of a comfortable home for a small family.  There is potential in that home for building more bedrooms and baths in the walk-out basement — or even pushing up the roof to create space above the existing top floor — and thus accommodating more children.  But the owners of that home have two  good incomes.  What chance do people with less than they earn have of finding a nice, roomy home to buy?

Very little chance indeed. Even in the areas that used to be a viable alternative for working class families — the suburbs.

And as Frances Bula says in this article, the “solution” to the housing problem everywhere seems to be to build more and more smaller and smaller homes.  Not suitable for families with several children.  And that trend can have long-reaching consequences for communities.

Last month, the Beedie Group, which is developing the Fraser Mills megaproject on Coquitlam’s Fraser River shore, asked to increase the number of units in its proposed development to 4,700 from 3,700 without changing the overall four million square feet of allowed building space.

That would mean shrinking the average size of the project’s units to 865 square feet from 1,100. It worried many Coquitlam councillors.

“The concern we heard was not about parking, not about extra population. It was about ‘What’s this going to do to the nature of the city?’” Mr. O’Neill said. “If it’s all small units, you’re just going to end up getting couples. We want to make sure there are a substantial number of units that will attract families.

Let’s see if any cities come up with good ideas for attracting and keeping families inside their borders.