This week in (our) history

Things I was supposed to do this week:

Of course, life got in the way:

Oh look, a picture of a dear little cottage, just like ours will be one day: 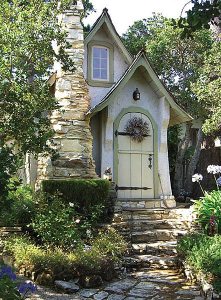 The property has been surveyed.

The designer/builder Laurel will be by to speak to Daughter this week, and to get some papers signed.  The city has to know they are authorized to act on our behalf.

Things are moving ahead at glacial speed, but moving nonetheless.

Next step:  must find Notary Public to witness our signatures on the Tenants In Common agreement.

Are these people ready to live in a laneway house?

We have signed the agreement to let our designer/contractor actually get started on designing and, you know, contracting.  But it’s obvious that we are not ready to move into a house that is 500 square feet large.  And when you think that 500 square feet is 46.451522 square metres, it seems even smaller!

Lest you think I am being hysterical…..this weekend is a holiday long weekend (BC Day — go BC!) and so we spent a whole day not going to the Pride Parade but instead cleaning out our storage space in the downstairs parking area.  The before picture: 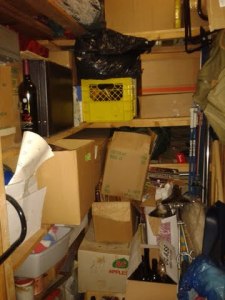 Pretty horrible, isn’t it?  Like we are two empty shoe boxes away from being a reality show.  But after a day of moving stuff, repacking stuff from flimsy boxes into plastic bins, recycling what we could, giving away what we could, and being subjected to the neighbourly stink-eye for filling our collective garbage bin to the top, we finished.

Looking for the after picture?

Nope.  Not going to show it.  Because it is nearly as horrible as the before picture.  We have too much stuff.  But at least now we know that we will have to find shelf space for a couple hundred LP records as well as everything else.

What’s happening, you ask? The wheels of fate grind slow…..but one of the variables that was hanging has now been settled.  So we can move ahead.

Decisions will be made.  Ducks will be placed in a row. Meetings will be held.  Papers will be signed (and notarized).

Our dreams will all come true.  But in the meantime…….

we have cats to look at.

Posted in Laneway House and tagged Lane Home, Lane house, Laneway House. Bookmark the permalink.
My Pain, My Life, My Struggles, My Fight