About a month ago, you might have seen a line-up of people waiting impatiently for an office to open in a local suburb.  No, not to snatch the Apple watch.  Not to put their names down for the Google self-driving car.  This crowd of near-rabid buyers was after their own piece of Metro area real estate — a condo in the new Evolve development– for less than $100,000.  This post is not going to be about how to get that space, it was gone within minutes of the doors opening to the sales office.

No, we’re going to talk about how a studio apartment can be big enough for one, or even two. Yes!  You can do it. Don’t listen to the people on TV who roll their eyes as they spout nonsense about how NO ONE should have to live in these eensy spaces.  For one thing, they’ve obviously never done it or they’d know it can be done — easily.  And also they are probably making a lot of money because, hey, they are TV stars, so can afford to live any way they want.

For those of us who choose to live in an exciting, busy, space-challenged city a small space is just what we need.  And want.

Now I could get into how you can design and build a super-duper space within the confines of a studio — and I will — but right now let’s look at this super-sweet 400 square foot space from Apartment Therapy to see how one woman manages to get the most out of every square inch without lifting a hammer or wielding a T-square. And, if it’s a rental, she can move out without leaving a mark to show she was there — a little patch and paint and she’s set to go.

Kay Rozynski is already lucky, because although her New York City apartment is only 400 square feet it is open and bright.  The living (i.e. non-bathroom) area is basically a large box with a very sunny balcony. Kay says she didn’t want to erect dividers because she wanted to maintain that airy flow.

And the sun just pours in!  Kay has taken advantage of this brightness by keeping her walls a warm taupe — neutral but not boring.  Plus she has lots of reflective surfaces, mirrors, windows, stainless steel appliances, the white wardrobe, even the TV screen.  Everything bounces that lovely light around.

And her major furnishings are all the same tone — a mid-range of greys and browns.  Nothing to make the eye stop as you scan the area.  Once again, a neutral backdrop to the accessories.

When Kay introduces colour, she keeps it to a couple of shades — yellow and orange, in the kitchen, blue/green by the bed, with the throw at the end of the bed matching the chair in the dining area and the one pillow on the sofa.  That watery aqua colour is repeated in a cushion and the throw on the sofa.  Your eye goes naturally from the aqua cushion on the sofa to the ones on the bed then up to the Moby Dick poster on the wall — also in ocean blue.  Very natural and soothing.

In the Lilliputian kitchen area, Kay has painted one wall with chalkboard paint.  This gives her something to write on, of course, but it also visibly moves the wall back.  And check out those accessories — once again she keeps to ocean blue and yellow. 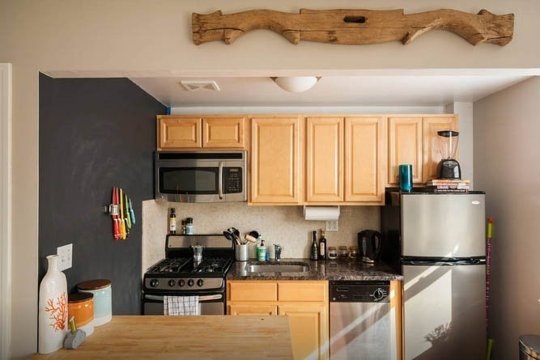 To add a little rustic touch Kay has hung a yoke on the bulkhead that separates the kitchen from the rest of the living area, but once again it’s tonally in harmony with the cupboard and the butcher block counter, so it’s not jarring at all.  And it’s a clever contrast to the Eames chairs at her table.

What are the lessons this little home has taught us?

Check out the original post in Apartment Therapy.  What other features do you see in Kay’s apartment that you could borrow for yours?