Facebook RSS Feed
← Knock, knock. Who’s there? And how many?
The Co-operative solution to affordable housing →

Our visit to the BC Home and Garden Show

DH and I braved the snow yesterday to take in the BC Home and Garden Show. Thanks to Ian at the Home Discovery Show for the admission!

There were masses of people, lots to see, lots to do, in short, the usual Home and Garden Show.

And there were lots of individual items — and a few over arching trends.

Smaller is definitely in.  We saw a couple of laneway builders — one, My Lane Home, builds the structure off-site and then assembles it on the foundation they put on your property.  We had a nice chat with them. A lot of the regular design/build/renovate exhibitors were also displaying info on building laneways.

Small is also in with the furniture exhibitors.  We saw very few big pieces, and we saw two exhibitors with credenzas that made into full-size dining tables.  Like this: 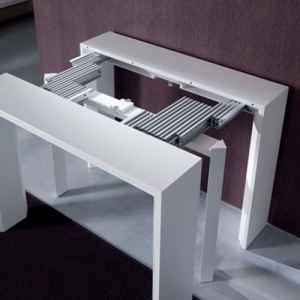 Plus there were several booths showing beds that came out of cabinets or the more traditional Murphy-bed set-up for transforming spare spaces into guest rooms with the touch of a button. Plus closet systems that made use of every inch.

The furniture was also sleek and functional looking — nary a curve or a piece of extra ornamentation to be seen in upholstered or hard furnishings. And it really was about doing more with fewer pieces.

Window coverings were also more in the “blinds and shades” family than opulent draperies — and there were no prints except for a few geometrics. When I remember the meters and meters of cabbage roses we used on every upholstered surface in the 70s and 80s!  They are totally out of style now.

The finishes were the ones we’ve seen before — hardwood and engineered floors are still the most popular, there isn’t anything new there.  The counter tops were either quartz or what I came to think of as “novelty” stones, like marble with swaths of green running through; plus lighter granites than the blacks and dark greys we’ve seen in the past few shows.

There was a clean aesthetic when it came to all the decorating. The only place I saw texture was in the walls.  Bathroom and kitchen tiles often had designs incised into them — one booth had sheets of tempered glass with colours and textures embedded in it.  For myself, I would never put anything like that in my home.  How many homes have baths installed in the 1980s?  You can tell because of the florals in the tiles, something that is completely out of style now.  Tiling is something you only want to do once — don’t put anything up that is so very ….. dating.

Saving energy was a definite theme when it came to the doors and windows on display.  Plus there were lots of home security exhibitors, so it seems that putting in a security system is no longer an option but a necessity.

Taking it outside, I was surprised to see how much concrete was being used, often in interested ways.  And outdoor fire pits and fireplaces were everywhere.  “Outdoor rooms” are taking over from “yards and gardens”.

Of course, there were lots of booths selling things, mixers, knives, nozzles and ladders — I saw one man carrying a huge box containing a super-duper car seat cushion.  Luckily we were travelling by transit and had no way to get a lot of “things” home, and of course, no where to put them when we got there!  So we saved a fortune.

Starting the adventure of building a laneway house in the real-estate jungle of Vancouver, BC
View all posts by ladywholivesdownthelane »
← Knock, knock. Who’s there? And how many?
The Co-operative solution to affordable housing →