Wow, a week ago we left Vancouver.  And already we’re one third of the way through our vacation!

We left Paris this morning via the Gare de Lyon with tickets I bought many months ago for the super-speed train. We got to Gare de Lyon in lots of time and made our way to Terminal 2.  Then we asked the young lady in a uniform how we could find out which gate to go to.  “Oh” she said, “You are too late.”  AAAAAAAAAHHHHH!  “No, not late, too early!  You are too early.”  **Whew**

These trains are the bomb. 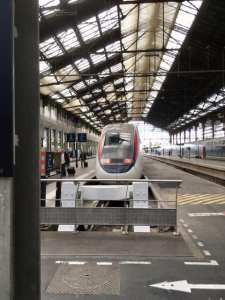 This clean, comfortable way to travel had us zipping through the countryside at nearly 300 kph. 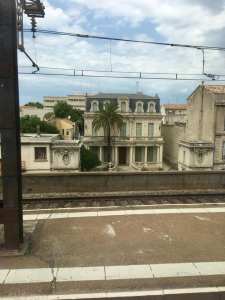 Then to the Mediterranean and Barcelona.

We arrived at the large, modern railway Barcelona Sants station and decided to get a bite before going to the AirBnB.  We tried texting our host but DH’s phone just wasn’t getting with the program.  So we called Telus on my phone and he got it straightened out.  Must buy more data as we are using it up like crazy with our Google maps walking us around.  Our conversation drew the attention of a young man in the cafe, who is from San Francisco and studying in Barcelona.  He is also interested in world music so DH and he had quite a good chat.

We finally got hold of our host (she called us when she saw all the strange messages from the same number) and she advised taking a cab as it would cost about 10Euro.  It did!  Our AirBnB is in a very nice neighbourhood, very convenient to many attractions.

With a nice view of the street

We’re currently at our AirBnB, and after a dinner of sausage and crema al queso de cabra with a crusty bread, olives, and a robust red, we are about to go out to explore.  Because in Barcelona the evening is ALWAYS young.

Back from our explorations.  We did not make it to see the Magic Fountains, even though they are quite close to our AirBnB.  Apparently the lady at Google Maps can’t speak Catalan any better than I can, and led us in merry circles until we were practically back at our starting place.  No matter, the fountains will be there every evening, so we will be back.

What everyone says about Barcelona at night we must echo.  We went out around 10 pm for our stroll, and though the streets weren’t full, they were not empty either.  Lots of parents with pre-school age kids, lots of open grocery stores, lots of restaurants and bars full of diners.  You certainly felt safe (if a tad lost) among so many.

We settled in for our nap, a bit apprehensive about tomorrow’s weather — they are calling for rain.

Starting the adventure of building a laneway house in the real-estate jungle of Vancouver, BC
View all posts by ladywholivesdownthelane »
← Adieu Paris – some thoughts
Europe – Day 8 →