Yes, we made it home again.

Our last morning in Paris (well, CDG) we got up at 6 to be out of our pod by the deadline of 7.  I had a so-so sleep.  I use a CPAP machine when I sleep, and apart from having no distilled water to use in the machine, there was no hard surface to put it on near the bed.  So I woke up several times.  This is one of the reasons why travel when one is younger is often easier.

We showered and headed out.  In the fluorescent-lit Yotel guest “lounge” (how can it look so depressingly grim?  Are fluorescent lights even still a thing?) we found a very sad cold breakfast (American cereal and cold toast) which was only available if one had a voucher, which thankfully we did not, because just a short walk down the terminal we found a nice little cafe with excellent coffee and real croissants.  We started back to the rail link we’d taken the night before to the Yotel and were intercepted by a polite lady who directed us to a security desk (for the time of day the people there were remarkably cheery, the gentleman who checked out our backpack was singing “Baby Shark”) and then onto a shuttle and back to Terminal 2A and the Air Canada wing.  I managed to fit some shopping into the morning, as I found many of the same souvenirs I had seen at the Eiffel Tower and Arc de Triomphe at the airport shop.

We had quite a wait, but we managed to survive by reading and watching our fellow travellers.  Then onto the plane to Montreal. We had good seats and enjoyed the flight.

We landed in Montreal around 1-ish in the afternoon and looked forward to about a 3-hour wait for our flight to YVR.  Not enough time to go into the city and have a meal, just enough to wander around Pierre Trudeau Airport.  We would have to feed ourselves for this leg of the trip, so decided to buy sandwiches from one of the outlets in the airport for a sky picnic once we were on the plane. We got the usual announcement that the flight was fairly full, so would someone like to check their bag for free?  I volunteered and got us bumped up from Zone 6 to Zone 3 when loading and also learned that the flight would be delayed for an hour.  We heard two stories, one was that there was a problem with the plane and it would have to be replaced;  and that the pilots were trapped in Ottawa with bad weather.  We had gone through something like this before, the pilots can only fly within a certain window and if the flight cannot take place within that window they need to find substitutes.  Which they did, only they had to come in from Toronto.  So we’d be taking off around 6 pm, about 1.75 hours after our original time.  Air Canada apologized about a hundred times and then gave us meal vouchers which was quite decent of them.

We’d already bought our picnic, but others were very happy to get the vouchers.  Airport food is expensive.

Speaking of which, when we were aloft (the pilots got there around 5:45 and we took off around 6 pm) we opened our lunches.  DH had bought a ham and cheese sandwich and some Doritos.  I had bought a sandwich where the ingredients listed included ham, bacon, cheese, chicken, hard-boiled egg, tomato, lettuce and gherkin.  There may have been more (possibly peanut butter and jelly).  I wondered if they just labeled all the sandwiches thus and one would get two or perhaps three of these ingredients.  Nope.  They were all in there.  And it tasted……weird.  But I would have eaten the armrest at this point so I soldiered on.  The potato chips were good, though.  Next time I’ll likely just buy something on the plane, we didn’t save much by buying in the airport.

We landed in Vancouver late but not horrendously so, breezed through customs (no line ups anywhere, not even the rest rooms) and got to baggage claim just as my suitcase rolled around.  Then we lined up for a cab.

The line-up was decently short, and they have a new system now where each section of the Lower Mainland is given its own fare, with maps posted along the line-up to explain how much you’d pay.  Naturally, our home being so far away from the airport, ours is $40.  But that’s fair, and we were happy to pay it, being somewhat pooped when we got here.

We loved our trip, we had a wonderful time in each of the places we visited, and of all that occurred only one incident was not great (Frankfurt Airport).

Customer service is so important when we can choose to go virtually anywhere on earth for our vacations.  For an example of how NOT to do it, DD has written of her less-than-stellar experiences (also in Germany……hmmmmm).

We are content, looking back on our travels, and looking forward to planning our next trip.

And looking at our souvenir. 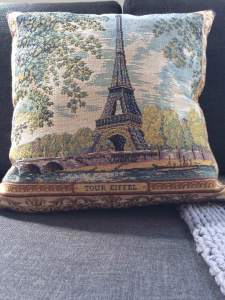 The Eiffel Tower was the first thing we saw from our plane coming into Paris, the real kick-off to our vacation.

Starting the adventure of building a laneway house in the real-estate jungle of Vancouver, BC
View all posts by ladywholivesdownthelane »
← Europe – Day 17 – Seville and civility
Plague journal →