How can we save more of our heritage homes?

Vancouver already has the screwiest housing market in the world.  Hyperbole?  Empty derelict houses are sitting on million-dollar lots in ordinary working-class neighbourhoods.  Huge houses and luxury apartments sit empty most of the year because of absentee investor owners.  Rental vacancy rate of less than 1%.  Housing costs beyond many salaries.

In this story on the city’s effort to save pre-1940 homes, the people who bought a Shaughnessy home for $4.6 million and who have it on the market for $7 million find it too small for their needs.

“They just think the building is not livable,” Liang said. “They are now looking for a larger property.”

Meanwhile city dwellers wring their hands and mourn the loss of heritage houses that originally made the neighbourhood so attractive; demolished so that enormous monster houses can take their place. 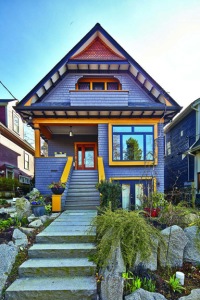 The problem affects neighbourhoods, almost exclusively on the west side, where old discretionary zoning and density rules are encouraging developers to raze smaller homes to build massive buildings.

In the first six months of 2014 there have been nearly 1,000 applications for demolition permits, an increase of 20 per cent over previous years…. Many of those involve pre-1940s buildings that don’t use all of their allowed yard setbacks or building heights.

And there are no easy fixes.

I would have to argue with the statement that the problem is almost exclusive to the west side of the city.  There are plenty of charming old homes in the Grandview and Sunrise areas that are being replaced by much larger structures.

The Vancouver Sun story lists some ways that Vancouver City government is hoping to save more heritage homes.  A planned moratorium on demolition permits for houses in Shaughnessy; a requirement that 90% of the demolished home’s materials be salvaged or recycled.

The moratorium on demolition permits may work in an area like Shaughnessy, but couldn’t be used city-wide.  Who would like to see their property value plummet because any buyer could not replace the over-70 year old structure with a new one (while your neighbour’s more recently built home could be smashed and trucked away to reveal that tender, juicy city lot just ready for redevelopment)?

But if someone were to ask me (and what is a blog for if not to answer questions no one has asked?) I would suggest a more-carrot-and-less-stick approach by the city to encourage the retention of heritage homes.

Does anyone else have any ideas?

Starting the adventure of building a laneway house in the real-estate jungle of Vancouver, BC
View all posts by ladywholivesdownthelane »
← The Vancouver Heritage Foundation Heritage Homes Tour
I have been a-wand’ring! →