Facebook RSS Feed
← How can we save more of our heritage homes?
Heritage homes — lovely and livable →

I’ve just been unpacking from a trip to the UK I took with my sister.  I was going to write a few posts from the other side of the pond — at least that was the plan — but I was too busy seeing the sights and hanging out in museum gift shops and eating.

The British have made the daily ritual of eating into a real art.  I know, right?  English food is supposed to be bland and unimaginative.  But it’s not.  It’s really good.

And they manage to fit it all into five meals a day.

We begin at breakfast.  I only had one “full English breakfast”*.  The rest of the time we had muesli or toast.  Or muesli and toast. Plus tea.  I really got hooked on tea in Britain, it’s always good no matter where you get it.  And sometimes it comes with a little pot of hot water for refills.

Mid-morning we took a break from shopping and sight-seeing with “elevenses”.  Tea and a scone or a tea cake (muffin).  that gave you the shot of energy you needed to last until lunch. 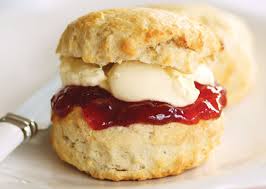 Luncheon was a lovely meal that could be a selection of cheeses and sausages, or a prawn sandwich (with RoseMarie sauce), or soup, or any combination thereof.  Sometimes we would have a nice lager-and-lime to quench our thirst. Sandwiches would come on white or brown bread or sometimes a bap (soft bun). But you could also get a black-pudding panini for a change. “Tomato sauce” is just ketchup. “Brown sauce” is like ketchup, but brown. Watch out for the mustard, though, their brown mustard is tasty but mild.  It’s the bright yellow mustard (that looks just like the innocent French’s mustard we slather on hot dogs) that’s the real killer.  It will bring tears to your eyes and a lump to your throat.  It’s very, very hot.

Then, laden with parcels and with our feet worn to nubs we would wend our way back to the home our relatives were graciously sharing with us.  Just in time for tea. That could be small sandwiches, or just scones or biscuits (cookies) or Battenburg cake or just a nice slice of seedy cake.  That way you wouldn’t be starving because dinner would often not be served before 8:30 or 9.

And what a supper that would be!  Wonderful salads, entrees, veggies and sides. More ways to cook potatoes than you can imagine!  Wine!  Cheeses to finish!  And of course, pudding.  “Pudding” refers to dessert, whatever it is, even pudding.

Then we would toddle off to bed.  I needn’t tell you that while I was packing on the pounds (which are measured in 14-pound units called stones) my svelte relatives were managing to maintain their youthful figures. I had to come back before I was charged overweight on my flight home.

I found new foods to enjoy, and not just haggis and black pudding!  Rocket, a green leafy vegetable.  Courgettes turned out to be young zucchini.  Frozen food was very good.  And my cousin, who is quite house bound, could order her groceries online and have them delivered to her door.

I know this isn’t a food blog, and I’ll be writing more about the houses we visited.  Napolean said that an army marches on its stomach.  Our small force certainly lived up to that.

Posted in Cities. Bookmark the permalink.

Starting the adventure of building a laneway house in the real-estate jungle of Vancouver, BC
View all posts by ladywholivesdownthelane »
← How can we save more of our heritage homes?
Heritage homes — lovely and livable →