We had big plans for today — a day trip out of town on my birthday!  It’s not every day a girl turns 65.  It’s not this day, either.  I see it this way:  between the age of majority (19) and when you are eligible for OAS (65) one can be quite vague about one’s exact age.  34?  43? sure, why not?  Then when you are 65 you are then eligible for lots of stuff.  But there’s no real reason to get any older than 65.  Okay, one day when I’m in my nineties I’ll get a kick out of prodding someone with my cane and boasting to my real age.  But until then, let’s just keep it at 65.

Our plans included getting up early, but for some reason we didn’t.  We were awakened by the sound of the local merchants opening their shop shutters, had breakfast, and then set out for the Placa de Catalunya, where we were to pick up the tickets for the trip.  This time I outsmarted that Google Maps minx by just saving a printout for the route to my pictures and following it.  Worked perfectly, and we got there and got our tickets with no problemo.  The tickets were like the never-ending gobstoppers of the day–they acted as fare on the transportation, as vouchers for lunch, and as tickets to the attractions where we were headed.  Which was:

A monastery about 50 kilometers northwest of Barcelona, Montserrat is definitely worth the trip.  We started out on the Metro, then switched to a local train which took us to the foot of the mountain. 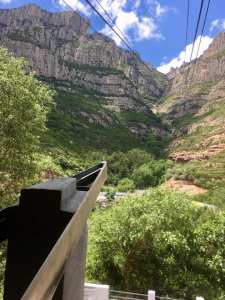 We then took a cable car, installed in 1930, all the way up to the Monastery.  We could have taken a little rack railcar to the top, but decided to fly instead. 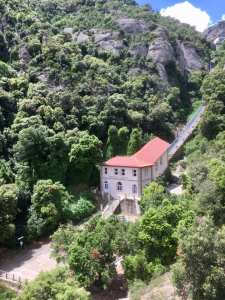 We then climbed into the community and took a funicular railway to the top of the hill. 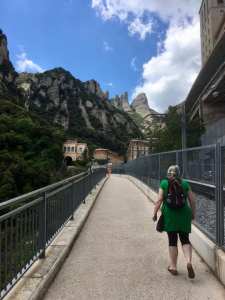 From where you could see all the way to the Mediterranean Sea! 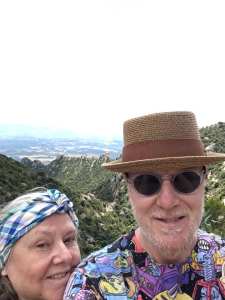 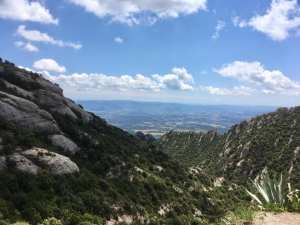 The view without goofy Canadian tourists in it

The rock the mountain is made of is unlike anything I’ve ever seen.  Once the bottom of an ancient sea, layers and layers of small rocks built up, glued together by natural cement, then thrust up into mountains that gradually became weathered. 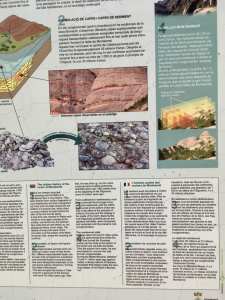 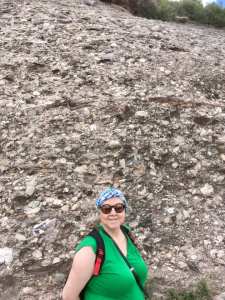 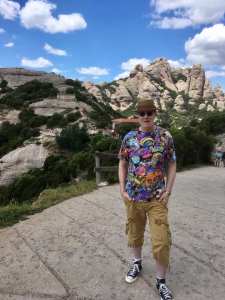 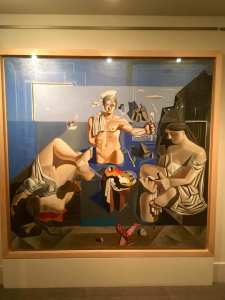 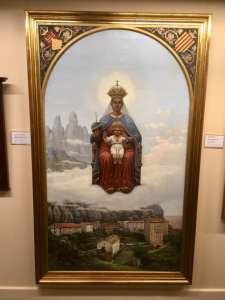 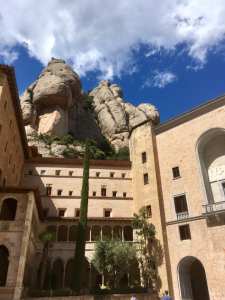 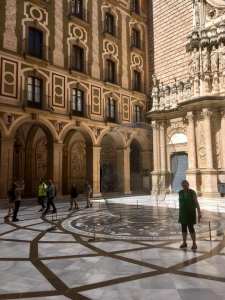 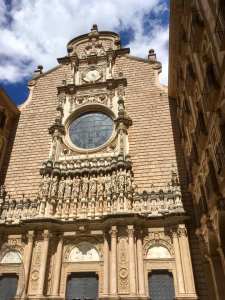 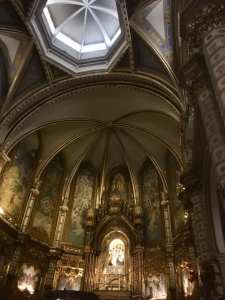 When we finally caught the gondola back down the mountain we just missed a train into the city.  But no worries, we sat in a shady spot and gazed up at the mountain where this wonder sits. 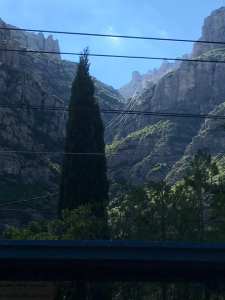 We then headed back to Barcelona on the train.  They had told us that Montserrat was visible for miles around, and we could still see it many stops down the line, silhouetted against the sunset.  Truly wonderful!

We got back to the AirBnB and I have to say I was beat.  But that’s not good enough for my 65th birthday!  A change of clothes and a quick splash on the face, and we headed out for dinner.  Our AirBnB host had recommended Le Faisan, just down the street.  And I have to say that I can never enjoy paella again because I will be that horrible person who says ‘Well, when I was in Barcelona……” We ate until we were full, drank the delightful Spanish wine and left with large smiles. 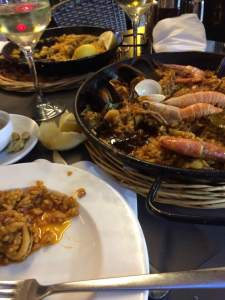 Then we walked down to see the magic fountains.  And they are truly magic.  We walked between the Venetian Towers down between fountains toward the giant fountains at the end of the street.

Unbe-freaking-lievable!  So beautiful.  And just for fun, just for giggles.

And then, miracle of miracles, we found our way back to our AirBnB just asking two nice ladies walking their dogs on the street which way to Placa d’Espana.

As my birthday is drawing to a close we tried to find a way to make it to the Dali museum but it would take another significant commitment of time — a whole day to find our way to Figueres and back.  We only have two more days before we head to Seville.  So we will spend them exploring Barcelona.

Starting the adventure of building a laneway house in the real-estate jungle of Vancouver, BC
View all posts by ladywholivesdownthelane »
← Europe – Day 8
Europe – Day 10 →

My journey - The good, bad and the ugly

my journey towards sustainable living in the city