What?  We are more than half-way through our Europe adventures!  No slowing down now, we still have lots to do and see!

Today once again the sound of the shutters being rolled up awakened us about 8:30.  We rose to another sunny day with big plans.  But because of a sluggish start and my getting ourselves lost (again) I was worried that we would not make it to Placa de Catalunya to start the HOHO (hop-on, hop-off) route that would take us to our final destination — La Sagrada Familia. Of course we were not going to miss our chance to see Barcelona’s most famous landmark and Gaudi masterpiece — I had booked our tickets months ago with Take Walks (through Expedia).

In the meantime I had bought us passage on a CityTours HOHO tour recommended by our AirBnB host, Arama.  We chose the East Side tour because it took us to the Sagrada Familia, but we also saw the waterfront and several interesting neighbourhoods. DH had his camera ready to capture the moments:

Some of the older buildings on the waterfront 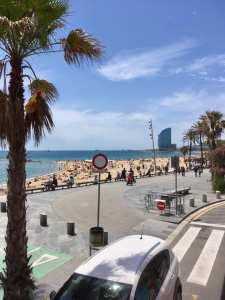 One of the new buildings on the waterfront, very distinctive, like a sail!

We found out that, like Paris, Barcelona had a great rebuilding in the 19th century, led in this case by Ildefons Cerdà.  But although the buildings (built in a gridded block system with chamfered corners at the intersections) are all built to similar guidelines, unlike Paris each building, each block, each area has its own look and personality.  Since then the 1992 Olympics brought sweeping changes to some of the poorer neighbourhoods Barcelona truly has become a city bejewelled with architectural gems. 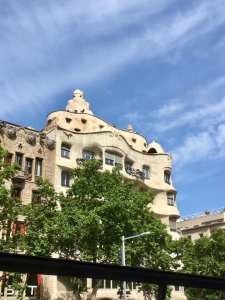 An eccentric house in an upscale neighbourhood 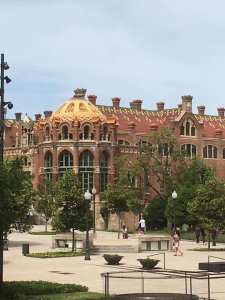 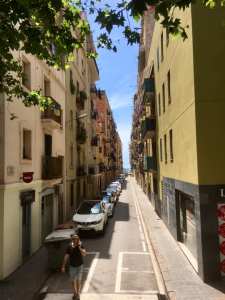 A typical block near the beach

Frank Gehry’s fish and a lesson in architectural geometry

The entrance to a park

But all the time we were getting nearer and nearer to the Sagrada Familia — would we make it in time to join our tour?

We pulled up just in time to zip around the corner to meet up with our guide and luckily we were the first to arrive.  Anna (guide extraordinaire) even let us sneak off to get some water as some of our group hadn’t showed up yet.

It was a wonderful tour, informative and friendly, with Anna filling us in on the stories (and some Easter eggs) displayed in the exterior:

The inside was equally as beautiful and captivating: 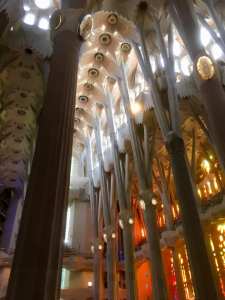 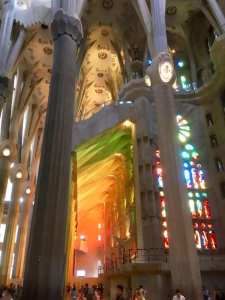 I love the way the light shines through the stained-glass widows and makes the aisles glow!

And there’s even a little cottage, built by Gaudi as a school for the workers’ children:

Clean and surprisingly modern, though with a lack of parallel lines and right angles!

And we enjoyed the company of a member of our group who seemed quite …. bemused by some aspects.  When Anna showed us a picture of the original facade, out in the middle of an empty field with some goats in the foreground yet, the woman was totally confused.  “Did they dismantle it and put it in the city?”  When she saw the crucifix hanging beneath a canopy above the (unfinished porphyry) altar, she asked if that was Christ ascending to heaven.  No, just, how?  I mean, read the book for crying out loud.

After the tour ended in the school house Gaudi designed and built for the students of his workers, we climbed aboard the tour bus to finish the route.

We dismounted at the Placa de Catalunya (we’ll take the tour of the other side of the city tomorrow) and headed back to the AirBnB.  It was a miracle!  I remembered quite clearly how to get back, smoothly negotiating the streets and amazing DH by bringing us back by the most direct route.

We chose to have dinner in, today was surprisingly tiring (and sunny!) but we’re planning to go out to the bar on the corner to see if we can persuade someone to make us a dry martini.  No kidding, we get blank looks when we ask for one in any of the restaurants we’ve been in.  We dropped back to the Mercat de Sant Antoni and loaded up with snacks, then got some croquettes freshly deep-fried from a little shop around the corner. With some bread, cold cuts, cheese and olives it made a delicious meal.

The bar was open and the charming young bartender made us two delightful vodka martinis!  It’s called the XIX bar, which I assumed was a Catalan name, but had been calling it the “19” bar (XIX in Roman numerals).  Turns out I was right.  It’s the 19 bar.  19 carrer de Rocafort.  One of the reasons I love Barcelona is that it’s just stuffed with these little establishments.  They are very small and often very specialized.  Like making and selling only croquettes. Or a bar that specializes in gin cocktails. Or a pharmacy that’s just one room wide and two rooms deep, where I replaced my broken reading glasses.  So your neighbourhood has markets and bars and restaurants and maybe a clothing store or a bookstore or a wine store or a fabric store or a souvenir store.  But if you’re missing something don’t worry, it’s in the next block (called manzanas, or apples, in Catalan).

We left the XIX bar with the sky still slightly alight, and something soft and seductive in the air calling us to ramble.  Unfortunately, DH had been starving himself all day and he really can’t do that, plus we had TOO MUCH SUN!!! and not enough water.  So we’re heading off to bed early tonight ready for our last day in Barcelona tomorrow.

Starting the adventure of building a laneway house in the real-estate jungle of Vancouver, BC
View all posts by ladywholivesdownthelane »
← Europe – Day 9
Europe – Day 11 →