I can’t believe our time here is nearly at an end.  What a trip we have had!  Each place more magical than the last.

Today we had a wake-up call scheduled for 6:45 AM so we could meet our friend/tour guide Peter  for a trip to beautiful, legendary Cordoba. We gulped down some hotel-room coffee (which was very good BTW) but nothing nearby was open so we couldn’t get any breakfast.

We got to the train station in good time, but not quite good enough to spend precious minutes in the long lines at the coffee bar and Macdonald’s.  So we boarded the train and headed east.  After an hour and a half through the Spanish countryside we got to Cordoba and started walking toward the ancient part of town. We were grateful that Peter took us into a nice modern coffee shop and introduced us to tostados Spanish style.  That’s a large slab of terrific bread, with olive oil, crushed tomatoes and shredded ham.  Quite a substantial breakfast.  Then it was off! A walk through some of the streets of Cordoba, and….

First stop, the Alcazar!  The site where Romans, Moors, and Christians lived. (All pix thanks to DH, Cal Koat)

The view from atop the tower.

A walk toward the entrance. 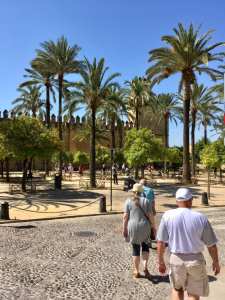 See those flat stones set vertically in concrete?  They are all over.

Part of the tower structure 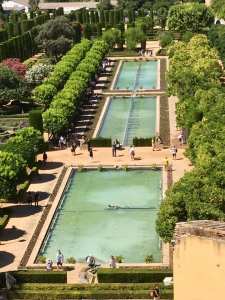 Just SOME of the fountains

Roman mosaic displayed in the castle.

Alphonse the 13th. See the book? He could READ so they called him the Wise. 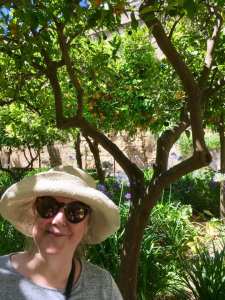 Then we walked down the water to see the Roman Bridge. 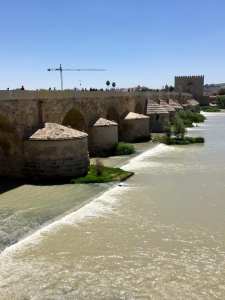 That’s the same river that flows through Seville, Guadalquivir 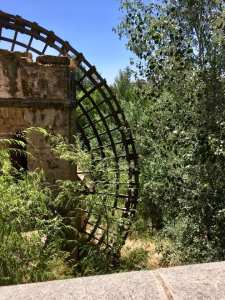 The reproduction of a water wheel, there were at least 3 on the river.

They put a new top on the Roman gate.

We had a quick tour of Tower of La Calahorra across the bridge from the gate.  The museum inside tells and shows the history of Al Andalus, the Moorish nation that existed in the middle of Spain for hundreds of years.

Then a stop for a snack at Santos Bar for a beer and a tortilla.  A tortilla is not, as you may have supposed, a Mexican flatbread, but rather a potato omelet.  It was great and just the thing to keep us going.

It was on to the Mezquita.  Originally built as a mosque by the Moors, it was remade into a cathedral when the Christians (re)took the territory.  (The Visigoths were there before the Moors, they were Christians, but also had two different religious factions fighting each other.  Peter told us all about it.) So you have a cathedral INSIDE a mosque. There’s also some plexiglass in the floor so you can see the original Visigoth church under the current structure.

Part of the Christian cathedral

The altar and ceiling

Then it was lunch at a very nice restaurant where we split two entrees between us and had some wine and sat down.  Because Peter may not look like a world class athlete exactly, but that man can WALK! It was such a pleasure walking through the deserted lanes and byways of Cordoba after the packed sidewalks and busy streets of Seville.  Quite a change.

We walked around Cordoba and saw so much of the old part of town: 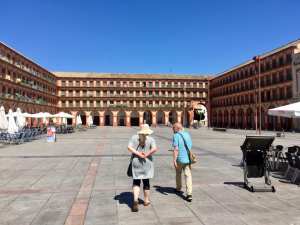 A large public square surrounded by private homes where loud processions are held. Why am I walking like Prince Philip? 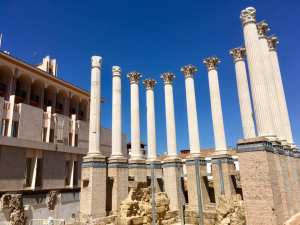 We then went to the Palacio de Viana to check out their beautiful gardens and patios.  There are 12 patios and one garden, all with tinkling fountains, gentle breezes, and wonderful flowers, plants and statuary. 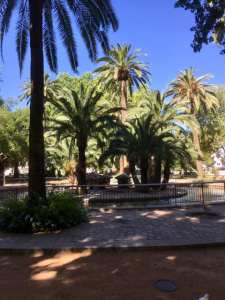 It was the perfect end to a wonderful day, and we think we walked over 20 kilometers all told around this fascinating city.  We made it back to the train station and zipped our way back to Seville through the golden Spanish afternoon.

We took a cab to the hotel because all four of the feet on DH and I refused to walk anymore, and the route allowed us to see the preparations behind the city hall for Corpus Christi, which is taking place this weekend.  The city bands are already preparing by marching through the streets and playing. The sound pours up from the cathedral square.

Then I collapsed into a chair and decided I had to get this all down before I forgot a second of it.

Tomorrow is our last full day in Seville and Spain!

Starting the adventure of building a laneway house in the real-estate jungle of Vancouver, BC
View all posts by ladywholivesdownthelane »
← Europe – Day 14
Europe – Day 16 →