Our last full day in Seville!  We were tired but still ready to give’er.  We got up and had a hearty breakfast at a local place decorated with real stuffed bull’s heads.  For real.

Then we went to join our tour of the Cathedral and the Alcazar.  We had Pablo as our guide and two nice Americans and one nice lady from the Netherlands as our tour companions.  First the cathedral, the largest Gothic cathedral standing, and 3rd largest cathedral in the world.  It was built on the site of a mosque that more or less fell down in an earthquake so it’s square rather than cruciform. It’s a UNESCO World Heritage site, full of beautiful art and statues and paintings and yanno, catholic stuff. 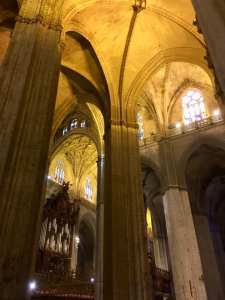 The ceilings are very high and very gothic 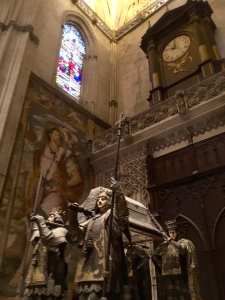 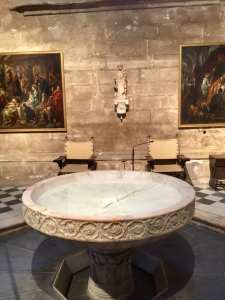 Baptismal font, still in use 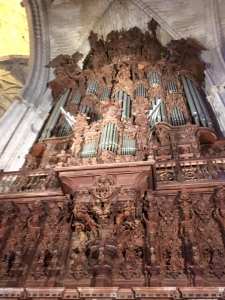 La Giralda tower, side with no scaffolding

Saints Junta and Ruffina, early Christian martyrs, who show up several times in the cathedral.

All the big statues are out of their niches and on litters to be carried out in procession tomorrow, Corpus Christi, and the altar is decorated with lots of white flowers.  Very impressive indeed. 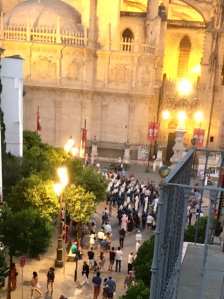 This area will be action central for Corpus Christi tomorrow. Last evening a nattily attired band marched through the square, practicing

We did not walk up Giralda tower because I’m still wobbly after yesterday.  One of our members did, the bells were ringing the whole time and she was in a massive crowd so I’m not sure she really enjoyed herself.

We then had a quick tour of the Jewish quarter of Seville, which we had seen during our walking tour (and also during our tapas tour) then on to the Alcazar.  I thought it had been built during the Moorish empire in Spain but actually Pedro the 1st (the Wise or the Cruel depending) had built it to impress the Moors from Grenada.  He certainly got it right.  It’s very beautiful, all high ceilings and tiled walls and floors.  It’s been built built up over the centuries, added onto by Charles V in a slightly different style, etc. But it’s been maintained meticulously, maybe it’s because it’s still the residence of the Spanish Royal Family when they are in Seville.

Inside the Alcazar, with many courtyards

The view from inside to a courtyard with a long water feature and orange trees planted on each side. Trees and water = paradise. 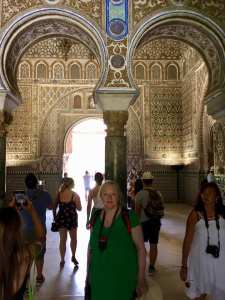 Interior of the Alcazar 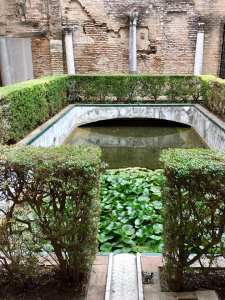 Painting that decorates the chambers where applicants for trading licenses for the New World would be heard.

Part of the original outer wall, now part of the courtyard

There’s no doubt about it, the super-walk yesterday is playing havoc with my leg joints, and we’re likely going to spend the rest of today lolling by the pool.

The pool was cool and refreshing, the deck warm but breezy and comfortable.  What a lovely afternoon. 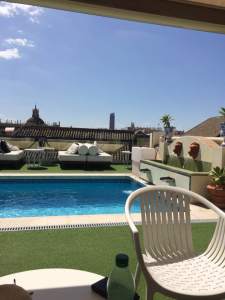 We showered and headed out for dinner.  Then we got an ice cream cone and headed to see the preparations for Corpus Christi over by the city hall.  But the streets were jammed.  Little shrines had been set up and we could not make our way through.

The Archbishop’s Palace is all bedecked with velvet banners

Now it’s 11 pm.  The streets are still packed.  People are having dinner beneath our window, in sidewalk cafes.  And the bands have just stopped playing in the square outside the Cathedral while a drone circled above, modern technology capturing ancient traditions.

Starting the adventure of building a laneway house in the real-estate jungle of Vancouver, BC
View all posts by ladywholivesdownthelane »
← Europe – Day 15
Europe – Day 17 – Seville and civility →